As new general guidelines are released on use of aspirin, health care providers are confused as to whether or not to prescribe aspirin for primary prevention of heart attacks or strokes, and if so, to whom.

According to researchers, the most recent guidelines for primary prevention recommend aspirin use for persons ages 40 to 70 years who are at higher  risk of a first cardiovascular event, but not for those over age 70. Yet, people over age 70 are at increasingly higher risks of cardiovascular events than those under age 70. “There has been considerable confusion from recently reported results of three large-scale randomized trials of aspirin in high risk primary prevention subjects, one of which showed a significant result, but the other two, based possibly on poor adherence and follow up, did not. As a result, health care providers are understandably confused about whether or not to prescribe aspirin for primary prevention of heart attacks or strokes, and if so, to whom,” they say. 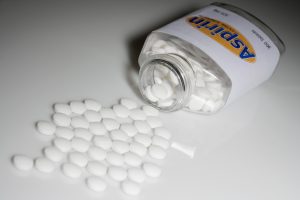 But, in a commentary published online before the printing of the American Journal of Medicine, researchers from Florida Atlantic University’s Schmidt College of Medicine and collaborators from the University of Wisconsin School of Medicine and Public Health, and the Harvard Medical School and Brigham and Women’s Hospital, provide health care providers with guidance and their patients. To do the most good for the most patients receiving primary care, they call on health care providers to make individual clinical judgements about prescribing aspirin on a case-by-case basis.

“All patients suffering from an acute heart attack should receive 325 mg of regular aspirin promptly, and daily thereafter, to reduce their death rate as well as subsequent risks of heart attacks and strokes,” said Charles H. Hennekens, M.D., Dr.P.H., senior author, the first Sir Richard Doll Professor, and senior academic adviser in FAU’s Schmidt College of Medicine in a statement released on Feb.17, 2020. “In addition, among long-term survivors of prior heart attacks or occlusive strokes, aspirin should be prescribed long-term unless there is a specific contraindication. In primary prevention, however, the balance of absolute benefits, which are lower than in secondary prevention patients, and risks of aspirin, which are the same as in secondary prevention, is far less clear,” he says.

“Based on the current totality of evidence, any judgments about prescribing long-term aspirin therapy for apparently healthy individuals should be based on individual clinical judgments between the health care provider and each of his or her patients that weighs the absolute benefit on clotting against the absolute risk of bleeding,” say the researchers.

According to the United States Centers for Disease Control and Prevention (CDCP), more than 859,000 Americans die of heart attacks or stroke each year, this accounting for more than 1 in 3 of all U.S. deaths. These common and serious diseases take a very large economic toll, costing $213.8 billion a year to the health care system and $137.4 billion in lost productivity from premature death alone, says CDCP.

The increasing burden of cardiovascular disease in both developed and developing countries highlights the need for more widespread therapeutic lifestyle changes such as avoidance or cessation of smoking, losing weight and increased daily physical activity. The therapeutic lifestyle changes and the use of drug therapy should include statins for lipid modification, and multiple classes of drugs likely to be necessary to achieve control of high blood pressure and preventing heart attacks and strokes.

“When the magnitudes of the absolute benefits and risks are similar, patient preference assumes increasing importance,” said Hennekens. “This may include consideration of whether the prevention of a first heart attack or stroke is a more important consideration to a patient than their risk of a gastrointestinal bleed,” he said.

The researchers noted that individual clinical judgements by health care providers about prescribing aspirin in primary prevention may affect a relatively large proportion of their patients. “For example, primary prevention patients with metabolic syndrome, a constellation of overweight and obesity, high blood pressure, high cholesterol and insulin resistance, a precursor to diabetes mellitus, affects about 40 percent of Americans over age 40. Their high risks of a first heart attack and stroke may approach those in survivors of a prior event,” they say.

General guidelines for aspirin in primary prevention do not seem to be justified,” said Hennekens. “As is generally the case, the primary care provider has the most complete information about the benefits and risks for each of his or her patients,” he adds.