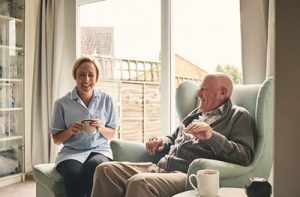 Nearly 90 percent of Medicare beneficiaries discharged to post-acute care receive that care in either a skilled nursing facility or home health care.  While spending on post-acute care continues to rise across the nation, little is known about the differences in patient outcomes between these two care studies.

A recently published research study finds that Medicare beneficiaries discharged from the hospital and into home health care have higher rates of readmissions to hospitals compared to those discharged to a skilled nursing facility. These results, published on March 12 by Penn Medicine researchers in JAMA Internal Medicine, but also shows that providers received significantly lower Medicare payments for these patients.

“With the increasing costs of post-acute care and changing payment models that hold providers more accountable for costs across clinical settings, it’s important to assess and understand the impacts of these choices,” said first author Rachel Werner, MD, Ph.D,  a professor of Medicine and director of Health Policy and Outcomes Research in the department of Medicine at Penn’s Perelman School of Medicine. “We found clear tradeoffs: While home health care may cost less, it doesn’t have the same intensity of care as a skilled nursing facility, which may be sending many of them back into the hospital,” says Werner in a statement announcing the publication of the article.

Spending on Post-Acute Care to Skyrocket

According to the researchers, the Penn study findings have important implications for today’s health care system, which continues to work towards refining payment incentives that optimize provider response and reduced health care spending. In 2015, Medicare spent more than $60 billion on post-acute care, a figure that has continued to rapidly increase.

Under the Affordable Care Act, Medicare implemented payment reforms, designed to reduce the rates of readmission, pushing hospitals to favor skilled nursing facilities, which have been shown to reduce those rates, noted the researchers.  But, at the same time, alternative payment models, such as accountable care organizations (ACO) and bundled payments, that may push patients toward less costly lower levels of care like home care, have come into play. ACOs can be a network of providers who collaborate to deliver more cost-effective treatments across the spectrum of care for Medicare and other patients in an effort to lower overall health care costs. Studies have shown that these two approaches are associated with lower rates of institutional post-acute care, such as skilled nursing facilities.

Penn Medicine researchers also examined the differences in rates of 30-day readmissions, 30-day mortality, functional outcomes, and Medicare payments for over 17 million discharges of eligible Medicare beneficiaries to home health care versus skilled nursing facilities between 2010 and 2016. Their study findings indicated that patients receiving home health care were 5.6 percentage points more likely to end up back in the hospital within 30 days of discharge than patients receiving post-acute care from a skilled nursing facility.

Taking a Look at Payment Differences

The Penn Medicine researchers called for further investigation among Medicare patients and others, given the high use and cost of post-acute care in the United States that’s only expected to skyrocket.