It’s common for nursing facility residents on the mend from a hip fracture to have a fear of falling (FOF) again.  This understandable fear can slow their recovery.

According to researchers, despite advances in rehabilitation services provided in acute care and post-acute facilities to hip fracture patients, long-term functional recovery after this event remains limited. Research findings published in the July issue of the Journal of the American Medical Directors Association (JAMDA) indicate that at least one cognitive behavioral intervention may not be better than “usual” care in reducing such anxiety. 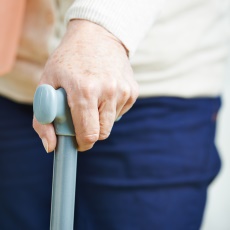 In the study, “Effects of the FIT-HIP Intervention for Fear of Falling after Hip Fracture: A Cluster Randomized Controlled Trial in Geriatric Rehabilitation,” researchers assessed the benefit of the FIT-HIP intervention, a multi-component, cognitive behavioral intervention for geriatric rehabilitation.  They compared the use of this intervention, based on the belief that behavior is mediated by cognitive processes, to usual care provided in this setting for patients recovering from a hip fracture. The FIT-HIP intervention consists of cognitive behavioral elements aimed at reducing FoF, including psychoeducation, guided exposure to feared activities, cognitive restructuring, and relapse prevention. Usual care includes mobility training, efforts to improve balance and gait, and exercise to boost muscle strength.

The researchers say that the study’s results showed no significant differences between groups observed for primary outcome measures, specifically, a change in FoF and/or mobility function. They concluded, “The results of this study show that management of FoF after recent hip fracture remains challenging to treat.

The researchers call for further research to first focus on exploring the ‘time-mediated effect’ of FoF after hip fracture.  The findings will provide insight as to how e direct physical consequences of hip fracture influence and relate to FoF.” They added that a better understanding of FoF after fracture “can help in adequately assessing when, and to what extent, treatment for FoF is required.”

JAMDA is the official journal of AMDA – The Society for Post-Acute and Long-Term Care Medicine.