Researchers say they have identified a new approach that could change the way patients are treated for atrial fibrillation (AF).   They report that a randomized clinical trial effectively used nerve stimulation through an ear clip to reduce AF burden and showcases an emerging noninvasive treatment option for patients.

AF is considered the most common abnormal heart rhythm condition, affecting more than 33.5 million people around the world.  This number is expected to continue to increase to 50 million in the next 20 years.   People with AF often experience shortness of breath, weakness, lightheadedness and fatigue. 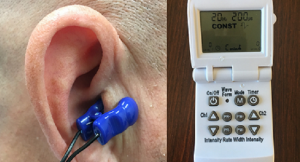 According to the researchers the trial is the first to examine the effect of transcutaneous electrical vagus nerve stimulate on suppressing AF.  The research findings detailing the late-breaking TREAT AF trial were presented in May at Heart Rhythm 2019, the Heart Rhythm Society’s 40th Annual Scientific Sessions.  This meeting is the largest arrhythmia-related meeting in the world.

Device vagus nerve stimulation has been successfully implemented to treat epilepsy and is a treatment option approved by the U.S. Food and Drug Administration (FDA). About one third of people do not respond fully to anti-seizure drugs and nerve stimulation has become an option of choice for these patients. The Parasym Salustim device used in this trial uses transcutaneous vagus nerve stimulation (TVNS) through a small ear clip. The device is used for treating tinnitus, but this trial sought to better understand if this treatment option could work for patients suffering from AF.

“Our clinical trial introduces a novel self-administered, non-invasive therapy for patients newly diagnosed with atrial fibrillation. There are cases when drug therapy or surgery are not the optimal options, so this has the potential to serve as another approach for patients,” said lead author Stavros Stavrakis, M.D., Ph.D., University of Oklahoma Health Sciences Center in a May 13 statement detailing the study’s findings. “It was encouraging to see the significant reduction in AF burden and that the device was well received in terms of adherence rate. This approach opens the door to a new way of thinking about AF management and showcases that we can push boundaries to help advance patient care,” says the cardiologist.

Taking a Look at the Study’s Research Design

The researchers said that the TREAT AF trial is a sham-controlled, double-blind (neither the study participants nor the investigators knew which treatment was the real one), randomized clinical trial designed to examine the effect of low-level transcutaneous electrical stimulation of the auricular branch of the vagus nerve at the tragus (LLTS) on AF burden over a six-month period.  They note that LLTS was delivered using an ear clip attached to either tragus (active; n=26) or the ear lobe (sham; n=27). The patients received individual training and used the device for one hour every day for six months. AF burden over two-week periods was assessed by noninvasive continuous ECG monitoring at baseline, three and six months and heart rate variability based on five minutes ECG readings and serum cytokines were measured at the respective time points. Baseline characteristics including age, gender and stroke risk were similar between the two groups.

The authors of this study call for trials in a multi-center setting with larger populations. Through additional research, the authors also hope to pinpoint exactly which patients would benefit the most from this therapy approach.