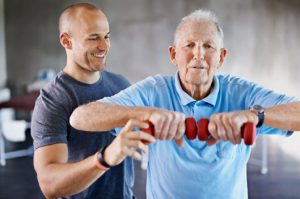 A National Institute of Aging (NIA)-funded study, at Chicago, Illinois-based Rush University, has reported promising evidence indicating that being more physically active is associated with a lower risk of Alzheimer’s disease and a slower rate of cognitive decline in older adults. But researchers say that it remains unclear exactly how physical activity lowers this risk for Alzheimer’s disease. But they say one theory that might explain this evidence is that physical activity is somehow preventing the formation of the damaging plaques and tangles are associated with Alzheimer’s. Perhaps being more physically active may simply improve or maintain the ability to function in the face of accumulating brain damage from Alzheimer’s disease, a concept sometimes referred to as cognitive resilience, the researchers add.

NIA’s April 26 blog posting, under “Featured Research,” details the Rush University study designed to test these two theories, finding an association between motor abilities and cognitive test performance, as well as a separate independent association between physical activity and cognitive performance. In both of these cases, better motor abilities or higher levels of physical activity were associated with better cognitive performance.

The NIA-funded study findings were published Feb. 19 in issue of Neurology.

The Nuts and Bolts

According to the NIA blog posting, the Rush Memory and Aging Project recruited more than 450 older adults in retirement communities throughout the Chicago metropolitan area. These participants underwent a series of cognitive, behavioral, and biomedical tests during their lives, and agreed to donate their brain and other tissues following their deaths.

The Rush researchers were particularly interested in measures of daily activity, motor function, and cognition taken about two years before death. Signs of dementia were observed in 191 participants, while the remaining 263 participants did not show signs of dementia.

The researchers say that daily activity was measured over 10 days using an accelerometer device worn on the wrist, averaged into a daily activity score. Cognitive functioning was measured as a composite of 21 cognitive, tests assessing memory, spatial reasoning, and finally the ability to rapidly perceive or compare objects.  Additionally, motor abilities were separately measured from daily activity as a function of several measures of fine motor skills, walking ability, and grip and pinch strength.

The Rush University research team then took a look at brain tissue from these participants after their death and examined it for signs of Alzheimer’s disease, including amyloid plaques and neurofibrillary, or tau, tangles. They also looked at nine other measures of brain damage and disease including those caused by cardiovascular disease.

The researchers found that in almost all cases, including those with no signs of dementia, the evidence showed at least one form of brain disease or damage, with most cases showing an average of three different forms of brain pathology. Critically, the authors found that even after accounting for the presence of signs of Alzheimer’s disease and other brain damage, more physical activity and better motor abilities were still associated with better cognitive function. This finding supports the explanation that physical activity may promote cognitive resilience, helping offset or mask the negative consequences of neurodegeneration.

The NIA blog posting noted that while the research study findings were promising, the researchers noted that there are some limitations to their study. Because the study was cross-sectional, researchers could not identify a clear cause and effect relationship between physical activity and cognitive function (e.g., it could be equally likely individuals with better cognitive function happen to also be more physically active). Participants with signs of dementia did have lower levels of physical activity and poorer motor abilities than those without signs of dementia. The current study also did not examine lifetime physical activity.

Finally, the researchers say that it is unclear whether the association seen between physical activity and cognitive function reflects the benefits of a lifetime of being physically active, or if initiating physical activity later in life may also be protective. They call for additional studies to examine individuals longitudinally across the life span and randomized controlled trials of physical activity interventions should help to answer these questions. It was stressed that this study did not speak to the cellular and neural processes that might underlie these cognitive resilience processes.