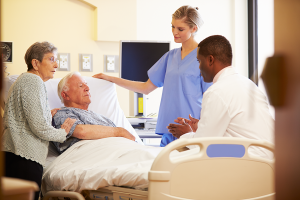 Dot the i’s and cross the t’s.

AARP Senior Writer Dena Bunis, warns that patients not officially admitted to an acute care facility can pay thousands of dollars for aftercare rehab costs.  If this happens Medicare may classify the patient’s stay as “observational status,” meaning the patient is considered an outpatient and may be responsible for paying for rehab costs after being released.   Even with Bunis’s blog article, “Need Rehab? Beware of Medicare’s ‘Observation Status,'”  posted on Feb. 1, 2018, its warning is still applicable today.

Richard Keene, in his late 80s, fell twice assisting his wife a severely injured his wife.  After being hospitalized for three days of treatment, he was transferred to a rehabilitation facility, notes Bunis in the AARP blog posting.

Keene’s family assumed that the elderly man, who was hospitalized for three days prior to being admitted for skilled nursing home care, would have his post-discharged treatment costs by Medicare, says Bunis.

But, like millions of others the family later learned that Keene had never really been admitted as an inpatient to the hospital. His short stay was classified under what Medicare calls “observational status,” meaning that Medicare considered him to an outpatient and skilled nursing rehab costs are not covered, says Bunis, noting that “observational status” designations cannot be appealed.”

“He couldn’t move by himself. They were doing tests on him. It seems like he was being treated like a regular patient,” says a quote from his daughter, Diane Keene, in the AARP blog article.  “I was really shocked,” she said.

For rehab, Keene spent two months in the skilled nursing a nursing home. But his rehab had cost him $24 339,” noted Bunis.  If Keene’s hospital stay had been classified as inpatient, Medicare would have paid for 100 percent of his care for the first 20 days and then all but the $161-per-day copay for the rest of his stay, she says.  His supplemental insurance policy would have covered the cost of copay.

A 2015 AARP study found that found that of the 2.1 million people who were in hospitals under observation status that year, about 150,000 were discharged with instructions to go to a skilled nursing facility for rehab or other skilled care. But only 50,000 did so, says Bunis, noting that some, like Keene, went to skilled nursing facilities for rehab, ultimately having to pay the bill out of pocket. Others returned home and never got the needed rehab care.

According to Bunis, the AARP study also found that two-thirds of hospital patients who were on observation status paid substantial out-of-pocket costs for their stays. Another 10 percent paid more than if they had been formally admitted.

Although Congress did enact a law that took effect over a year ago that requires hospitals to inform patients within 36 hours that they are in the hospital “under observation,” it doesn’t solve the problem,” says Bunis.

The moral to this story… Be aware of how Medicare classifies your hospital visit.  It could be costly if you don’t.

To see this blog posting go to https://www.aarp.org/health/medicare-insurance/info-2018/medicare-observation-rule-fd.html.