Enhanced Medical Rehabilitation (EMR) which includes goal-oriented, motivational physical and occupational therapy, helps older patients recover more fully from broken hips, strokes and other ailments that lead to admission to skilled nursing facilities (SNF) for rehabilitation, according to researchers at the Washington University School of Medicine (WUSM) in St. Louis. 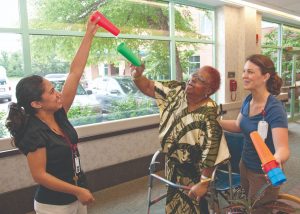 According to researchers, EMR – a medical approach where physical and occupational therapists work together to engage patients more fully during their therapy sessions — helped patients to improve their functioning better than if standard physical and occupational therapy had been provided in the same skilled nursing facilities, says their study’s findings published July 31 in the journal JAMA Network Open.

“We found that when you engage and motivate people, they do better,” said the study’s first author, Eric J. Lenze, MD, a professor of psychiatry, in a statement.

The researchers note that patients receiving enhanced rehab did not get more or longer therapy sessions. Instead, therapists focused on specific goals important to individual patients, and they delivered, on average, 24 motivational messages about those goals during every therapy session. That approach resulted in a 25 percent improvement in functional recovery, they say.

The WUSM research team studied 229 patients — 114 of whom randomly were chosen to receive enhanced intervention and 115 of whom received standard therapy. Each was in a SNF while recovering from an injury or illness, specifically a hip fracture, stroke or major surgery.

The enhanced rehab in this study involved the use of motivation during rehab therapy sessions, and the key was centering therapy on goals that were meaningful to the patient.

“It’s more than just getting people home; everyone wants to go home,” said co-author and study coordinator Emily Lenard. “In enhanced rehab, therapists focus on concrete goals. For example, if a patient had taken care of grandchildren on Wednesdays before the problems began, then the therapists might focus on the grandchildren to motivate the patient, a goal that patient can visualize in his or her head while doing exercises that might otherwise seem mundane,” she says.

Added Lenze: “Now the question is whether those gains will last over the long term. We believe extending enhanced rehab from skilled nursing facilities into the home setting will be the next critical step.”

EMR Can Ultimately Save Money

Lenze notes that one challenges of utilizing EMR is that therapy can be expensive, and some insurers balk at the expense. But with an aging of America’s population, he argues that enhanced therapy could save money for older patients recovering from injury, particularly if the therapy makes them more likely to get back into their homes and stay there.

“Avoiding rehospitalizations and long-term care in a nursing home has a huge economic benefit,” said Lenze. “We already pay a great deal for what’s called post-acute rehabilitation, and it’s unclear whether the health-care system has the appetite to continue paying for more and more care. I think, however, that we need to get past the idea of providing more care and focus more on providing better, more bang-for-the-buck care. I think Enhanced Medical Rehabilitation does that,” he says.