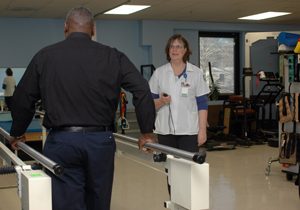 Medicare beneficiaries, recovering from strokes, receive vastly different amounts of physical and occupational therapy during their hospital stays despite evidence that such rehabilitation is strongly associated with positive health outcomes, finds a newly released study by at Providence, Rhode Island-based Brown University.  The data also suggests that patients who receive more physical therapy (PT) are less likely to be readmitted to a hospital within a month, yet the amount of care made available to Medicare patients varies widely.

“For stroke patients, rehabilitation services are one of the most important components in providing treatment after they are stabilized in the acute setting,” noted Kumar, who is also an assistant professor of physical therapy at Northern Arizona University. “This is the only treatment that helps patients regain activities for daily living, such as walking or using the restroom independently. So, it’s really important to start physical therapy and occupational therapy as early as possible,” says Kumar.

The study’s findings were published  on the April 24, in the Physical Therapy Journal.  The study detailed in the issue builds on additional work from the same group published January in the Archives of Physical Medicine and Rehabilitation. That study showed that stroke patients who receive more PT — which helps patients restore movement to parts of the body affected by a stroke and regain functions such as walking, balancing or moving their arms — have lower risks of hospital readmission within a month after discharge.

According to this research journal, Medicare patients diagnosed with an ischemic stroke — the most common type of stroke, which occurs when a brain artery becomes blocked, reducing blood flow — who received 75 minutes or more of PT while in the hospital were 14 percent less likely to be readmitted than those who received none. Even 30 minutes lowered the risk of readmission by 10 percent, the researchers found.

Yet the researchers found that the amount of OT, which focuses on helping patients to regain facility with everyday tasks such as getting dressed or using the restroom, had minimal impact on readmission risks.

Kumar credits PT for reducing risk of hospital readmission two ways. One, this therapy helps patients restore movement and regain their ability to accomplish tasks. Second, it allows physical and occupational therapists to play a key role in planning for and preparing patients for the next stage of their post-acute care — whether that is an inpatient rehabilitation facility, a skilled nursing facility or the patient’s home, with home health care assistance.

Patients who were dually enrolled in Medicare and Medicaid, indicative of more complex clinical needs and lower socioeconomic status, were 16 percent less likely to receive either rehabilitation service. Patients who had a feeding tube inserted, indicative of a severe stroke, were 53 percent less likely to receive rehabilitation services, the researchers found, noting that the findings indicate a failure to provide rehabilitation care to patients with more complex needs and with more severe conditions.

Kumar is now looking at 2017 Medicare claims data for a variety of potentially disabling medical conditions including stroke, heart failure, joint replacement and hip fracture to see if Medicare policy changes since 2010 have improved the amount of rehabilitation services patients receive. Kumar will also examine when rehabilitation services are initiated to see if that has an impact on patient outcomes.

Kumar thinks further study is warranted and that a randomized controlled trial on the amount and timing of hospital rehabilitation services is necessary. The results of such a clinical trial could inform clear rehabilitation guidelines from the American Heart Association/American Stroke Association, a revised Medicare payment model and ultimately better patient outcomes.