After studying cardiac rehabilitation (CR) patients over two decades, researchers say these CR patients are more overweight, and have an increased prevalence of coronary risk factors than those patients in the past.  With CR’s growing popularity over time, thee changing demographics are presenting new challenges to treatment.

Days ago, a study published in the Journal of Cardiopulmonary Rehabilitation and Prevention described changes in CR patient characteristics over two decades.  The study analyzed data from 5,396 patients who received CR at the University of Vermont Medical Center over a 20-year period between 1996 and 2015.  The researchers looked a variety of variables, including the reason for participation in CR, the presence of comorbidities, Body mass index (BMI), age, sex and medications taken. 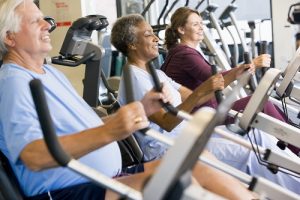 The findings indicated that while women were still underrepresented, they now make up 29.6 percent of CR patients, compared to 26.8 percent in 1996.  Also, the percentage of patients with a BMI of 30 or more increased from 33.2 percent to 39.6 percent, this reflecting an annual increase of  0.5 percent.  While mean weight and waist circumference didn’t change, researchers attribute the steadier rates to the growing number of women who are now receiving CR, this lowering overall averages. When waist circumference and weight were controlled for sex, both were shown to have increased significantly over time.

The researchers say that the most dramatic shift over two decades was the underlying reason why patients were receiving CR.  The percentage of heart value replacement rose from 0 percent to 10.6 percent. For those receiving CR as part of their treatment for myocardial infarction, the percentage increased from 39.6 to 29.7 percent in 1996. At the same time, the percentage of coronary bypass patients decreased significantly, from 37.2 percent to 21.6 percent as did angina patients, from 5.4 percent to 1.5 percent.

CR is “Underutilized” Despite its Popularity

The use of cardiovascular medications has also increased, the researchers say, noting that the biggest change came from the use of statins by 98.7 percent of the CR population. Statin use was at 63.6 percent 1996.

Finally, the researchers note that despite its growth, over the past two decades CR is still “underutilized,” with only 35.5 percent of patients who survive a myocardial infarction participating in the medically supervised program.

The researchers say that their study is limited by its focus on a single health system with a “relatively homogeneous” population, and a less-than-comprehensive range of diagnostic categories included. They believe that the changes their study identified over time should continue to be monitored for future trends.