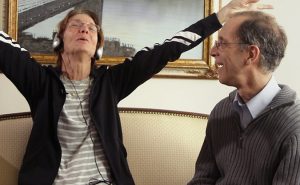 Mark your calendar. On May 23, from 12:30 p.m. to 2:30 p.m. at RowanSOM Stratford Campus, the Glassboro-based, New Jersey Institute for Successful Aging presents a free screening of the Award-Winning film Alive Inside, followed by a Q&A on successful aging with an expert panel.  Lunch will be served.

In Alive Inside, filmmaker Michael Rossato-Bennett chronicles the astonishing experiences of persons with Alzheimer’s disease around the nation who have benefited through the simple experience of listening to music to ease their suffering.

The 78-minute documentary, released in Jan. 18, 2014 at the Sundance Film Festival, follows social worker Dan Cohen, as he tries to demonstrate music’s ability to combat memory loss and restore sense of self-worth to those with dementia.

According to the Alive Inside’s web page, when filmmaker Michael Rossato-Bennett was hired to make a website for Cohen, founder of Music & Memory, a nonprofit organization that brings personalized music into the lives of the elderly and infirm, he met Henry, a 94-year-old dementia patient who had been provided with an iPod loaded with a selection of music tailored especially for him.

“Henry had basically been sitting in a hallway for 10 years with his head down,” says Rossato-Bennett describing him as “listless and disconnected.”   The film director added, he found out Henry loved Gospel and Cab Calloway so we put it on an iPod for him.

Once the headphones were placed on his head, his eyes focus, his posture straightens and his face lights up as he listened to some of his favorite music. Henry even sang along with Cab Calloway, the jazz superstar famous for his rapid-fire scat singing.

Rossato-Bennett said that Henry’s surprising response reflects research findings that show that music engages the brain more fully than any other type of stimulus. He notes that researchers have reported that the entire brain lights up when exposed to music, especially the areas that correspond to pleasure, movement—and memory.

Throughout the film, Rossato-Bennett visits family members who have witnessed the miraculous impact of placing headphones on patients who then become very expressive; his pioneering efforts have placed personal music players in nursing homes. Included in this film are revealing interviews with health care experts including renowned neurologist and best-selling author Oliver Sacks (Musicophilia: Tales of Music and the Brain) and musician Bobby McFerrin (“Don’t Worry, Be Happy”).

Touching Hearts and Souls Through Music

“Through music, we have the power to help millions of people awaken to who they are and what they can be,” adds Rossato-Bennett. “Music lets us reach a population otherwise unreachable. It allows us to touch hearts and ignite souls. I want the disconnected young to do this awakening!” To accomplish this Rossato-Bennett has created The Alive Inside App- (www.aifAPP.com) a free tool designed to help anyone find music for their elder.

Rossato-Bennett founded the Alive Inside Foundation, a nonprofit organization dedicated to expanding the message of human connection and empathy that lies at the center of the film.

If you have any questions about this special screening or need any additional information, please call 856-566-6882. To register, go to https://rowan.co1.qualtrics.com/jfe/form/SV_5jzGNUCMHnqgSEZ.

For more details about the Alive Inside Foundation, go to https://www.aliveinside.org/.